The Queen’s Theatre originally opened in 1907 taking prominent position on the corner of Shaftsbury Avenue and Wardour Street. In 1940 an enemy bomb severely damaged the theatre, which remained closed until 1959 when restoration was complete. English Heritage gave the theatre Grade II listed status in 1972 and since April 2004 the theatre has played host to Les Misérables.

The show must go on!

Given that Les Misérables is the world’s longest-running musical, the Client’s ultimate brief was that “the show must go on”. Rather than close the theatre, all works were to be undertaken without interruption or disturbance to both rehearsals and up to twice daily performances.

One element of the works required the partial removal of an existing brickwork curved wall located within the offstage left wing to create 20% more usable offstage space with 8m clear headroom and also enhanced audience visualisation of the performance. This meant loss of an actor’s quick-change area though, with new quick-change facilities sought via amalgamation of nearby barrel-vaulted storage rooms.

For an additional challenge, at second floor transfer structure level the curved wall also supported twin steel beams 10.5m long that support the actor’s dressing room corridor wall between second floor and roof levels. During the temporary case in which the Pynford stooling operations took place, the end of the beams would be unsupported. Hence, a bespoke structural steel temporary works frame was installed 7.5m above stage level spanning between the curved wall and façade wall to temporarily support the existing historical beams. A vertical prop from sub-basement, within the stage area, was precluded due to the performances and location of the IT room at subbasement level.

Finally, due to a composite design, the columns of the tower were encased in concrete with dowels into the existing masonry walls to provide diaphragm action. This also provided enhanced fire resistance to these critical elements. Upon completion of the steel tower and transfer structure, careful hand demolition on the curved wall then commenced.

Because of the geometrical complexity of the original building and interaction with the proposed works, all design works were undertaken in 3D environments. Finite Element modelling was undertaken using SOFiSTiK, drafting operations in Revit and fabrication drawings in AutoCAD Structural Detailing. Every reinforcing bar and steel component had to be checked for size and weight to ensure it could be manoeuvred into position. In total 9.4 tonnes of structural steelwork, 1.9 tonnes of reinforcement and 105.7 tonnes of bagged cement and aggregate for site batched concrete were moved onto site and circa 45 tonnes of demolition arisings removed.

Excellence, creativity and innovation came from Abbey Pynford’s ability to undertake the detailed design and construction, using in-house personnel, of both the temporary and permanent works incorporating the many temporary states of the structure throughout the sequential construction. This encompassed a multifaceted approach to materials and design techniques, constrained not only by out-of-hours working but also restricted access to and within the work area. All materials and structural elements had to be manhandled into position with only the aid of small mechanical equipment. Elegance had to be provided on the detailing. 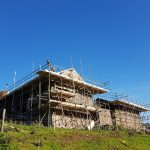 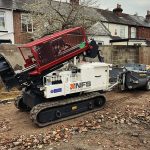